Is It Better To Stick With CDs Than With Stocks Right Now?

Is It Better To Stick With CDs Than With Stocks Right Now?

Late in 2008, right after the market crash, I was providing financial advice to a woman as part of a free financial clinic put on by the Financial Planning Association.  We were discussing ways to preserve and grow her investments when she mentioned the approach taken by her 85 year-old aunt.  The aunt simply buried her savings in coffee cans in her backyard!

Although I’d be amazed to find anyone else following this practice nowadays, I do in fact meet many people who keep most of their savings in cash utilizing bank CDs, money market funds, and other minimal-risk investments. Indeed, the amount of cash that has flowed out of equity mutual funds since 2009 – these are funds that invest primarily in stocks – has been unprecedented.  That’s not surprising given the pummeling most 401(k) and other retirement accounts have taken, not to mention the subsequent roller coaster-like performance of stocks (remember 2011?).  What risk-averse investors may not realize, however, is that after taking inflation into account, there are very few periods of time when cash outperforms stocks.

The following chart compares the growth of $10,000 invested in cash (through 30-day Treasury bills) to $10,000 invested in stocks (through an S&P 500 index fund) over the five-year period beginning at the market peak in 2007, representing the second worst period for stock performance since 1932.  All amounts are adjusted for inflation.  As you can see, both investments performed equally over this period.  Note, however, that both would have lost about 8% in real terms (that is, adjusted for inflation). 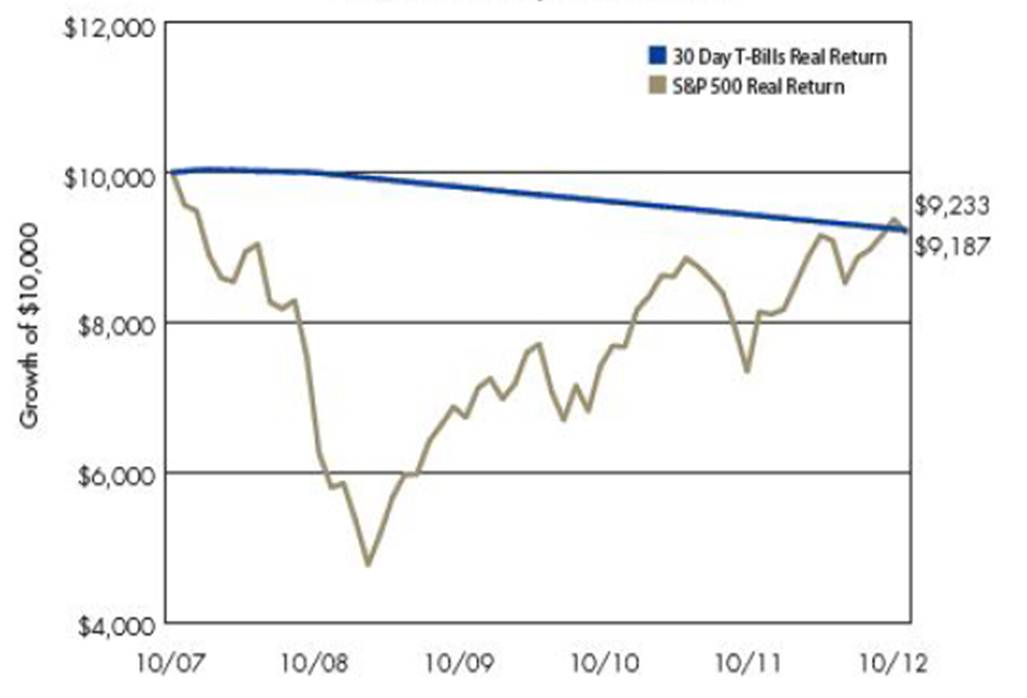 Now look at the same data over the previous fifteen-year period.  The purchasing power of the equity investment would have grown 40% more than that of the cash investment.  Of interest is the fact that the cash investment declined throughout and beyond the two market downturns.  A key reason was that interest rates remained lower than the inflation rate during those periods. 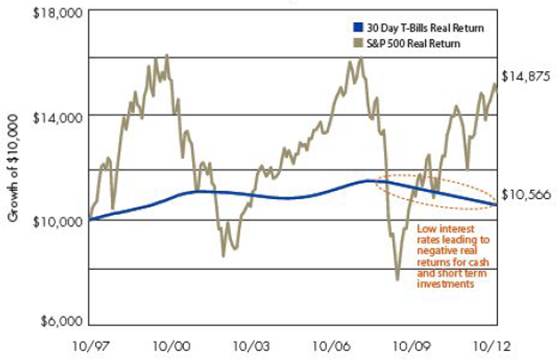 There are two lessons here.  The first is that stocks will outperform cash on a real basis over time, especially when inflation is rising.  In fact, cash will generally not keep up with inflation, so if you have not saved enough during your working lifetime to pay for your retirement, leaving your savings in cash will simply not work.  The second is that stocks are not a good place to be investing cash that you expect to be utilizing within a few years.  If you had been planning to buy a house in 2009, for example, keeping the down payment in stocks during 2008 would have been catastrophic.

Given that, you should not be keeping all your money in cash.  Nor should you be putting all of it in stocks either.  Instead, here’s a simplistic investment strategy you might consider:  invest funds in stocks for goals that are more than five years away, and switch to cash when the time horizon shrinks to less than five years.

Even better, there are many more asset classes available for investment than just stocks and cash, each with its own risk-reward performance and response characteristics to different economic conditions.  There’s no one asset class that will work for you over time and all the time, and that includes cash.