Today, many Americans rely on savings in 401(k)-type accounts to supplement Social Security in retirement. This is a pronounced shift from a few decades ago, when many retirees could count on predictable, constant streams of income from traditional pensions.  The question is: has this shift improved the average American’s retirement prospects?  According to the Economic Policy Institute (EPI), the answer is NO.

EPI’s Retirement Inequality Chartbook analyzes retirement preparedness and outcomes by income, race and ethnicity, education, gender, and marital status.  Its conclusion is that the rise of the 401(k) – and the consequent demise of the defined benefit pension plan – created a few big winners and many losers.

The 401(k) itself was never intended to replace traditional pensions as a primary retirement vehicle.  It was developed by a benefits consultant back in 1980 who came up with the idea of adding an employer matching contribution to a bank’s cash bonus plan.  But because the 401(k) and other so-called defined contribution plans shifted the investment risk from employers to employees, employers (particularly in the private sector) viewed them as a lower-cost way to provide for retired employees as compared to defined-benefit pensions.  The result was a concomitant decline in companies offering pensions (see chart). 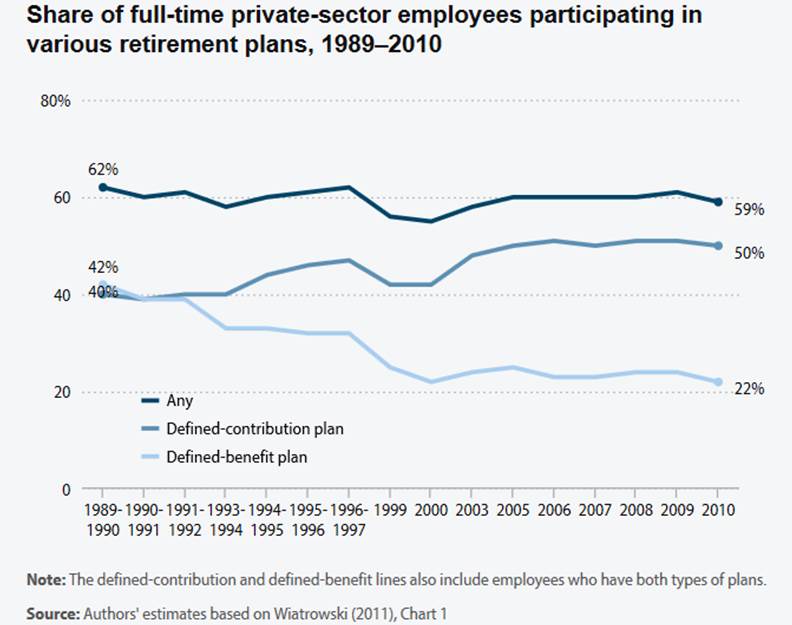 Unfortunately, the effect of this shift has been what the report calls retirement-income inequality, especially for higher-income vs. lower-income workers.  Median retirement savings today are $44,000, the study found.  Compare that with the top 1 percent of households, which had more than $1.3 million in retirement account savings.  There are several factors behind this:

The study also found growing disparities across many other classifications.  The retirement savings of younger households, for example, have stayed flat or declined in recent years, despite the fact that successive generations should be saving more in retirement accounts due to their higher average incomes.  Another finding: unmarried people, especially women, tend to be less prepared for retirement than their married counterparts.

EPI’s overall conclusion is that our current retirement system, which shifts risk onto workers (including the risk of outliving one’s retirement savings), is exhibiting growing disparities in retirement readiness across income, race, ethnicity, education, and marital status.  This underscores the importance of preserving and strengthening Social Security, defending defined-benefit pensions for workers who have them, and seeking solutions for those who do not.

You can read the report in full here: http://www.epi.org/publication/retirement-inequality-chartbook/