How to Beat the S&P 500 Using Mutual Funds

How to Beat the S&P 500 Using Mutual Funds

Despite the large number of mutual funds and ETFs that invest in equities, there are really only three primary strategies each of them follows. Let’s say you want to invest in the asset class comprising large cap U.S. stocks, whose benchmark is the S&P 500 index. You can invest in a fund that includes all 500 stocks in the benchmark, weighted identically to the benchmark. Or you can choose a fund whose manager picks a subset of stocks from that universe based on some particular criteria. Your only other option is to purchase a fund that utilizes some form of market timing to buy and sell the 500 stocks within that asset class. Which approach is most likely to consistently outperform the S&P 500 index?

Let’s take the first type of fund. Typically referred to as an index fund or as a passively managed fund, its strategy is to match the benchmark index as much as possible. Depending on the frequency with which the fund is reconstituted, the efficiency with which the fund executes trades, and of course the fund’s cost, you’d expect it to slightly underperform or slightly outperform the S&P 500 over time.

A variant of this approach involves funds that utilize the same stocks as the benchmark, but weight them differently. The stocks in the S&P 500 index are weighted according to the total market value of their outstanding shares. In other words, those company’s stocks whose prices have been pushed up by investor popularity will have greater representation in the index, and vice-versa. One alternative weighting methodology is called fundamental weighting, in which the same 500 stocks are weighted based on various company performance metrics rather than on stock price. Another alternative is to overweight the value stocks within the index – those companies whose share prices are lower relative to their business fundamentals – sometimes referred to as value-tilting. The logic here is that value stocks have the potential for higher future growth since they are currently underpriced relative to others in the index. Both these methodologies have been shown historically to slightly outperform the S&P 500 over time.

Next let’s consider the stock picking approach. The only way that type of fund manager can generate higher returns than the S&P 500 index is to include in the fund just a subset of stocks that will collectively produce a higher return than the full index. In order to do that the manager must find out something about those companies that will result in stock price outperformance that no one else knows. Otherwise numerous other investors would have already bid up those companies’ share prices, reducing their potential returns to something closer to the benchmark average. If the fund manager really does possess inside information, that’s a crime and he/she is not likely to be around very long. If not, then despite whatever marketing terminology the fund uses to explain its methodology and expertise, it’s really just making guesses about the future. Either way are you sure you’d want to invest in that fund?

What about the market timer? He/she is even more focused on predicting the future than is the stock picker. In order for market timing to work, the fund manager would need to be able to perceive a market shift and act immediately before everybody else. For example, in June 2013 the S&P 500 dropped 5%. If the market timer did not sell the fund’s holdings before June 18th it would have been too late to avoid losses. And if he/she had anticipated the decline too soon, for example by selling on April 18th, the fund would have missed out on a 7% run up before the decline.

As if the above isn’t challenging enough, the market timer faces a second challenge every time he/she decides to sell, and that is to determine when to buy back again. How consistently can anyone make such a series of decisions correctly? Try it yourself at the following site:
http://www.getrichslowly.org/blog/2014/02/04/what-is-market-timing-and-should-you-do-it/.

Are we to conclude that stock picking or market timing funds cannot beat the S&P 500 index? Any S&P 500-focused fund can beat the S&P 500 in any given year, just as any football team can beat any other football team in any individual game. The difficulty is being able to do it consistently. The chart below from Dimensional Fund Advisors shows how well equity funds in general (not just those focused on large cap stocks) have been able to consistently outperform their respective benchmarks. During the three-year period from 2007 through 2009 (the top row), 1,162 funds out of 3,056 total stock funds (38%) beat their benchmarks. Yet only 25% of those funds continued to beat their benchmarks over the subsequent five-year period from 2009 through 2014. Similar results can be seen over longer five and ten-year initial periods of time in the two lower rows. Vanguard and Morningstar have reported similar findings from their research. 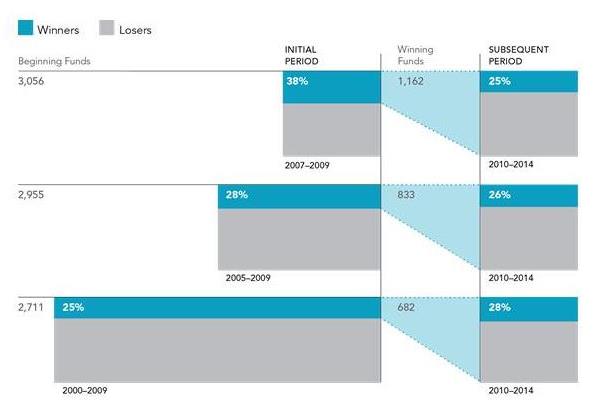 Coming back to the original question, is it possible to identify funds that will outperform the S&P 500 year after year? According to the chart above, most funds that lead the pack during one period inevitably lag during another. Remember also that the higher the costs charged by a fund, the lower the likelihood the fund will be able to outperform even in a single year, let alone over time. So how can you beat the S&P 500? Your best shot is probably to choose a low-cost operationally efficient fund that follows a methodology (e.g. fundamental indexing or value tilting) that doesn’t involve guesswork. If you choose well you will probably succeed on average over a number of years. You won’t accrue any bragging rights about how you blew away the index. But on the other hand, you won’t embarrass yourself either.