In 1994 William Bengen, a financial planner in Southern California, discovered that an individual starting retirement should be able to spend the equivalent of 4% of his/her investment assets, adjusted each year for inflation, for a period of 30 years without running out of money.  The portfolio allocation that maximized this return was about 60% stocks and 40% bonds.  His research was a breakthrough in helping retirees plan for the financial risk of longer retirement lifespans.  The 4% safe withdrawal rate has since become a rule-of-thumb among many financial planners.

There has been extensive follow-on research over the past 20 years attempting to confirm as well as improve on Bengen’s seminal work.  Researchers have discovered the following:

According to the Blanchett/Finke/Pfau analysis, the problem with using historical return data is that future market performance (and consequent retirement outcomes) really depends on the prices of stocks and bonds today.  In the past low bond yields have generally coincided with attractive stock valuations, and vice-versa.  This relationship has allowed well-diversified, balanced portfolios to perform reasonably well year after year.  What’s unique today is that, relative to their historical averages, bond yields are very low and stock prices are high at the same time.  You could argue that’s due to the Federal Reserve’s quantitative easing program designed to keep interest rates artificially low.  Regardless of the cause, rising interest rates will cause bond prices to fall, and equity returns following periods of high valuations are historically lower than average.  The combination will result in lower overall portfolio returns than we’ve seen historically.

The researchers state that “the demonstrated success of the 4 percent rule is partly an anomaly of U.S. market returns during the 20th century.”  They calculate that a 4% withdrawal rate today has only a 60% chance of keeping you solvent during a 30 year retirement.  For most retirees, that would be unacceptable.  The new safe rate (according to the research) is only 3%.  See the following chart which shows the likelihood of success (that is, of your money lasting) for a 3% withdrawal rate for various stock/bond allocations and for various retirement durations based on the research. 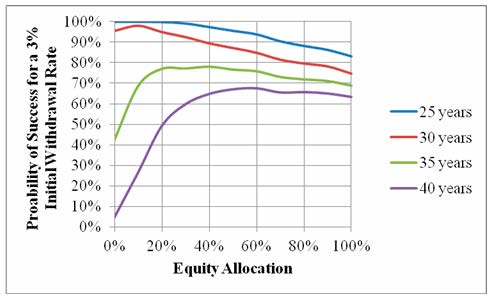 One surprising result is that the more aggressive the asset allocation (i.e. the more stocks you hold), the lower the probability of success.  This is inconsistent with research on the 4% rate, where a 60:40 stock:bond ratio has been shown to yield the highest success probability.  One could surmise that the higher need for stock returns at the 4% level outweighs the associated higher risk they add to the portfolio, while a more conservative return such as 3% is more impacted by the risk than by the returns.

In any case, what (if anything) can you do with this new information?  From an investing standpoint, it suggests making sure your allocation model is more conservative around the beginning of your retirement. Once you’ve passed the ten-year mark, other research indicates that an increasingly more aggressive allocation might actually be the best approach (see https://www.cognizantwealth.com/2013/10/24/should-you-increase-equity-allocation-in-retirement/).  You can also utilize single premium immediate or deferred income annuities to reduce your reliance on your portfolio.  In earlier research Wade Pfau found that such a combination can increase your probability of success whatever safe withdrawal rate you use.